Something remarkable happened recently: The producers of the movie “Cowspiracy”, a documentary produced by Leonardo DiCaprio, which makes wildly inaccurate claims about the role of animal agriculture in climate change, publicly backed away from the main tenet of the movie and what may well be the biggest gee-whiz stat in the 2014 documentary.

In an effort to present animal agriculture as the most fearful threat to our environment, the World Watch Institute and producers Kip Andersen and Keegan Kuhn cherry-picked an inflated number from a single, flawed source. Armed with the faulty data, they made the claim that animal agriculture is responsible for a staggering 51 percent of greenhouse gas (GHG) emissions worldwide, more than any other source, including transportation. 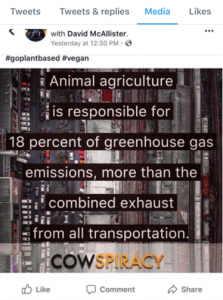 I am afraid “someone whipped data until they confessed”, which does not make them right after all.

As a professor and air quality specialist at the University of California – Davis, and the former chairman of LEAP, a global United Nations Food and Agriculture Organization (FAO) partnership project to benchmark the environmental footprint of livestock production, I was dismayed by “Cowspiracy’s” claim. Not just has LEAP commented on Conspiracy earlier, I’ve been working tirelessly to set the record straight about animal agriculture in general and “Cowspiracy” in particular. My efforts are not simply for the satisfaction of being right; but rather, to help us focus on real, scientific-based facts that will lead to working toward a common, effective, well-informed solution to mitigate the serious problem of global warming.

I’m not alone, either. Anne Mottet and Henning Steinfeld, leading FAO livestock staff, recently published an article on the dangers of oversimplifying GHGs from livestock. Although they submit there is no life cycle estimate for global transportation, in the United States alone, “the life cycle of passenger transport would be about 1.5 times higher than the operational ones.”

These days, Andersen and Keegan are much closer to the truth, having tweeted and posted that 18 percent of GHGs is from global animal agriculture on their website, cowspiracy.com.

Incidentally, the 18 percent figure is still not accurate, having come from the FAO study “Livestock’s Long Shadow,” which has since been revised by its authors to 14.5 percent (FAO “Tackling Climate Through Livestock,”), but at least it is far less misleading than 51 percent. Perhaps reluctant to dial back the statistic, they seemingly couldn’t resist stating that even at 18 percent, it is more than “the combined exhaust of all transportation,” using a life cycle (direct and indirect) assessment for animals and a mere tailpipe emission (direct only) for transportation, an assertion Mottet and Steinfeld debunked in their article noted above.

Even more disturbing is that the overly inflated 51 percent number is still being espoused, even in the infographic still on cowspiracy.com and elsewhere on the internet where people go for information. No wonder everyone is confused.

One of the latest to pick up on the cringe-worthy 51 percent is Beyond Meat, which showed the stat on its home page as recently as September 2018, seemingly to sway more people to purchase the company’s plant-based products that mimic meat. 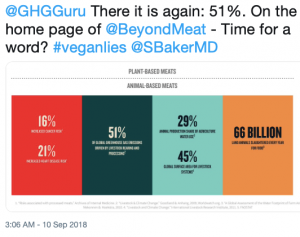 Now, I’m not here to tell you what to buy or what to eat by any means, nor do I worry that others are happy to do one or both. What I take exception with is using false data for any purpose.

With that in mind, I fear that “Cowspiracy” is another example in a long list of vegan spokespeople who are more interested in furthering their agenda than in telling the truth. Given the size of the audience that “Cowspiracy” has played to on Netflix, I want to offer the facts to one that is just as large, if not more so. I’m hoping you agree.

Finally, when researching about this blog, I noticed that the same Leonardo DiCaprio who produced this film Cowspiracy, is also significant investor in Beyond Meat, the plant based company using the same flawed numbers. Some would say a logical consequence; other would call it a conflict of interest. Regardless, no reason why the one cannot learn from the other.

At the risk of sounding naïve, I believe people generally want to do the right thing. The problem is, we continue to bombard them with directives based on falsehoods. Whether intentionally or through misinformation, the outcome is the same. It keeps us from getting on the same page to work on a global solution to the problem of climate change.